The origin of my Cake is traced to the ancient Trypillian Civilization of Ukraine. A Honeycake or Medvnyk was prepared following each Harvest. Nuts were collected and fruits preserved to last over winter. Each year, the previous year's cake was eaten in celebration of another successful Harvest or Kupalo. This region became the Bread Basket of Continental Europe. Some claim the oldest reference to Fruitcake dates to Roman Times. Pomegranate seeds, pine nuts and raisins were mixed in a barley mash then combined with honey, spices,and preserved fruits. This dense cake could sustain those on the move for a very long time.

In the 1400's spices and dried fruits arrived in Britain. Thus began the British fascination for spiced cake. Pope Innocent VIII, 1432-1492, in his Butter Letter or Butterbrief, sent permission to Saxony stating: "milk and butter could once again be used in the North German Stollen Fruitcakes". During the 18th century, Fruitcakes were outlawed entirely throughout Continental Europe. They were considered as "sinfully rich" and laws were passed to prohibit their existence.

Between 1837 and 1901, Victorian England popularized the Fruitcake. It was customary for unwed women of the time to place a slice of dark traditional wedding cake under their pillow whilst they slept so they would dream of the man they hoped one day to marry. From this time onward, the British Fruitcake became the Hallmark of their Culinary Tradition. 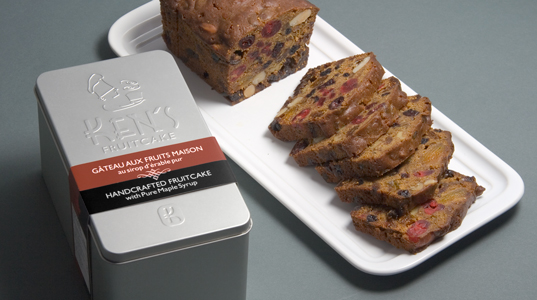 My grandmother often told us the story of the bakery her parents, Bohdan and Catherine had in Vienna 150 years ago. Their eldest daughter Julia attended a prestigious ballet school with members of the Austrian aristocracy and she introduced some of them to the family's Fruitcake.

One noble family commissioned a wedding cake. The Emperor tasted some and enjoyed it. My relatives became suppliers of fruitcake to the Court. Their commerce lasted many years. Later in the 19th century, their children would flee Austria for Canada and settle on the Canadian Prairie. One of the daughters – my mother – moved to Toronto during the Second World War.

I settled in Montreal in the 1970's. I have modified the family recipe by adding cranberries and replacing the honey with maple syrup.

I know you will enjoy it!